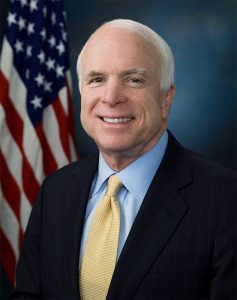 I was polling for Reuters and we did a poll in New Hampshire in April, exactly one year before the NH Primary. The poll tested 11 GOP candidates — George W. Bush, Elizabeth Dole, Jack Kemp, Dan Quayle, John McCain, Lamar Alexander, etc.

In the simple horse race, we found Bush leading with 34%, Dole 15%, Quayle 11%, Kemp 10%, McCain 7% and so on. I then followed it up with “blind biographies” of each candidate — one paragraph, very positive, no names. Bush came in with 24% and McCain at 23%. It was the “war hero, POW for 5 and a half years, maverick, tackling the tobacco industry and campaign finance reform” that thrust him into second place.

I was then contacted by McCain’s strategist to conduct two focus groups to validate the results. To be sure, the messaging worked. McCain won NH by a landslide in 2000 and the compelling black and white video of him on a stretcher telling reporters they “broke both my legs” was sufficient.