The Zogby Report on Higher Education: Higher Ed Must Reinvent Itself

In both polls, we asked Which of the following statements best supports your view about higher education?

Statement A: Although costly, a college/university education is paramount to securing a good future.

Statement B: A college/university education often does not provide graduates with sufficient preparation for the workforce.

In July of 2018, we found that overall, 45% agree with statement A vs. 47% of the public selecting statement B – leaving just 7% not sure about the issue.

Based on the topline data, what implications do our survey results hold for the institution of higher ed?

Before we probe further into the data, let’s look at some key demographic breakdowns.

Comparing Those Who Completed College vs. Those Who Did Not

Arguably the most key demographic here.  Take note that among those who have attained a college degree, there is a clear divide over whether or not the higher ed experience can enhance one’s ability in navigating the workforce upon completion. 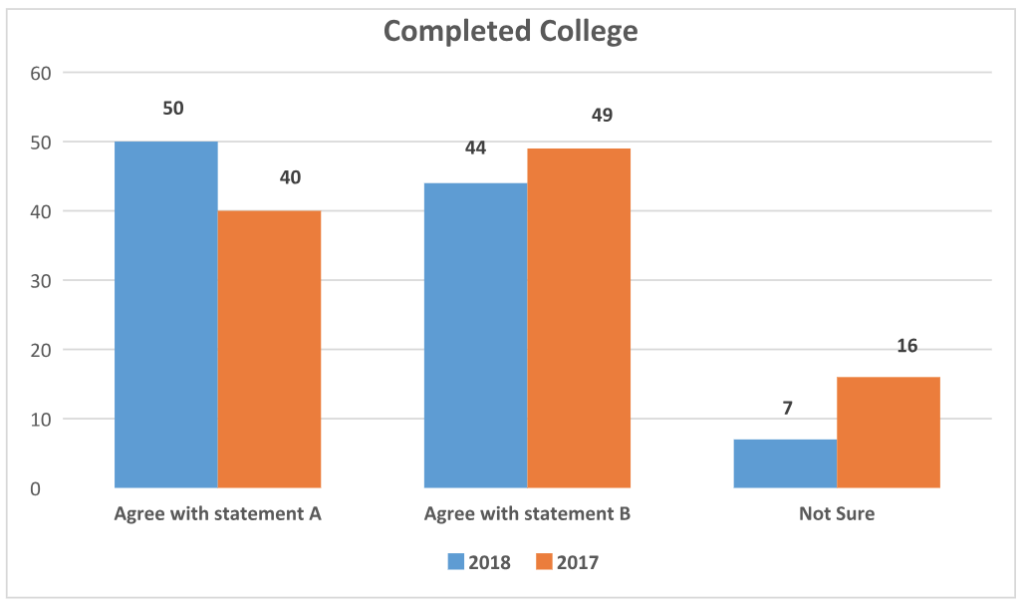 Although not displayed in the chart above – regarding those who have not completed a college/university degree – about 3 of 10 (28%) agreed in 2017 that a degree is paramount to securing a good future. When asked again in 2018 results went up to 40%. In 2017 a slight majority (51%) thought it often does not equip its graduates with sufficient skills for the workforce. This attitude remained at 51% again in 2018.

Either way you slice it, what we see here among the most relevant demographic is a sharp division and that does not bode well for the future of higher ed.

What about the various age groups? Is there a significant base of support for higher ed found within a certain age group? 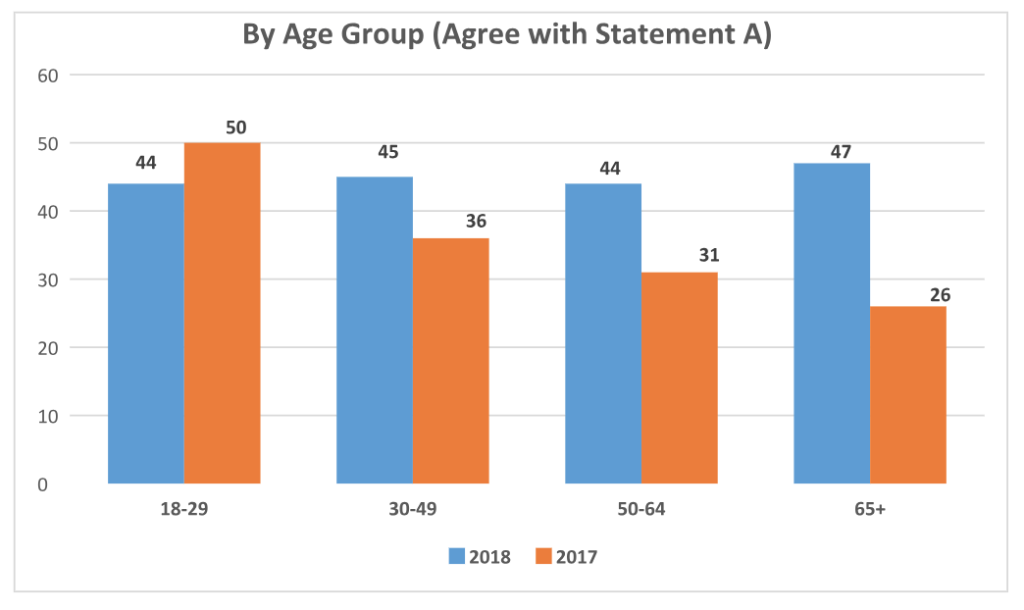 Over the course of one year, the gap between those aged 18-29 and those over 65 closed and what we now see in 2018 are consistent numbers among all age groups who support the sentiment that a higher ed degree is paramount to securing a good future. Still, however, none of the cohorts reveal majority sentiment for statement A – the more positive stance on higher ed. 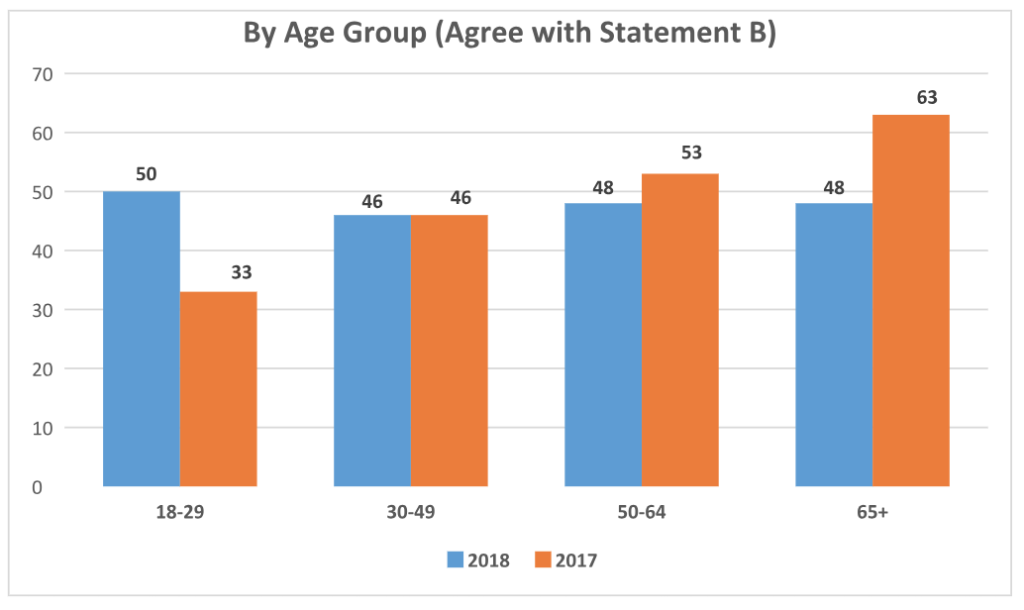 On the flip side, here is a chart displaying those who chose statement B (the more critical stance on higher ed).

Looking at those 65 and older – many of whom may have been among the early crowd that benefited from the growth of higher education during the 1950’s – there is a sharp decline in the belief that higher ed often does not sufficiently prepare graduates for the workforce.

Whereas those aged 18-29 were smaller in their support for statement B in 2017 – this time around we see a swing towards greater pessimism concerning the institution of higher ed.

Why such a big shift coming from the youngest and oldest generations? The explanation for an increased negative stance on higher ed among those aged 18-29 may be related to the frequent reports that show a greater number of Millennials living at home with their parents.

Regardless of the “why questions”, the numbers above do not fare well for what has long been considered an essential American institution. When we find numbers that display a level of intensity over the course of a year on a given topic – that indicates a trend has been solidified and therefore is not likely to disappear on its own.

The notion of the creative class, developed by author Richard Florida, refers to those who work in the knowledge sector ranging from science, engineering, and computer programming to arts, education, entertainment, etc.

We often include this as a demographic question in our surveys to allow for greater texture in the data. So what do self-professed members of the creative class think about the state of higher ed? 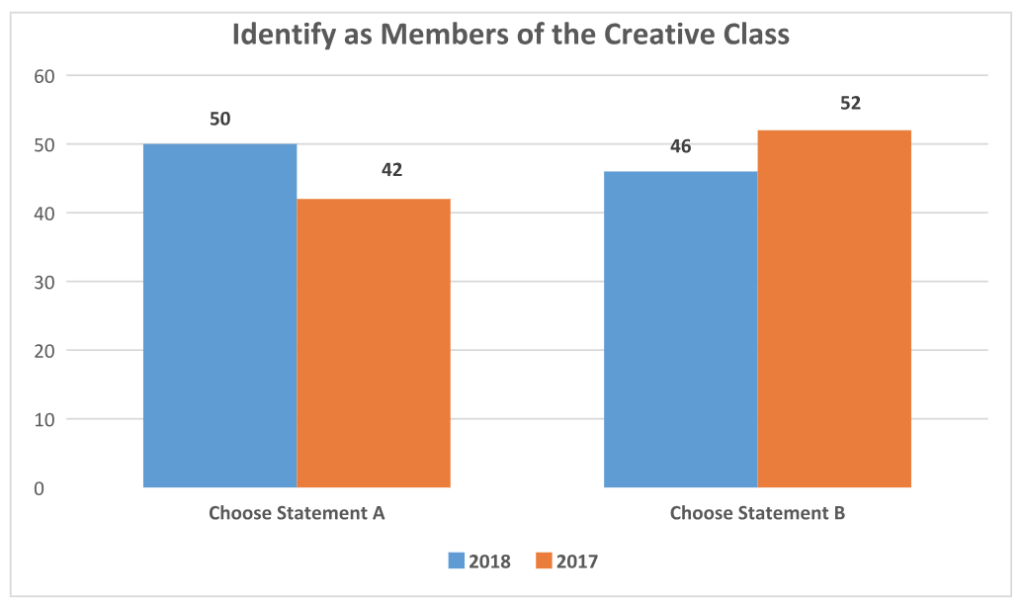 From 52% in favor of statement B back in 2017, down to 46% in 2018, we can see a trend has now taken root among those who identify as the creative class. Even among a highly educated group such as the creative class division runs deep as to whether or not a college or university degree gets you where you need to be.

In the final analysis, we have seen in both the overall results as well as the key demographics related to the topic, the once almighty pillar of American society is standing on shaky grounds. Can a pillar remain erect while nearly half of its framework no longer supports it? And for how long?

I’m not saying that the institution of higher education is near extinction. But what the public seems to be saying – according to the data – is that higher ed in its current form needs some serious improvement since a plurality (47%) agree that a college/university education often does not provide its graduates with sufficient preparation for the workforce.

There are many challenges that higher ed face including exorbitant prices for both private and state college tuition (plus room and board), the growing demand for MOOC’s (massive open online courses) and apprenticeships, as well as the ever-increasing popularity of the DIY (do it yourself) phenomenon that so many from Gen Z and the Millennial cohorts engage in through information sharing sites like YouTube.

Despite the aggressive growth model undertaken by most campuses around the country, the challenges to higher ed are too many. In fact, the notion of the ever-expanding campus is part of the problem and directly related to the ever-increasing tuition.

One solution colleges may find is to adopt a business model that focuses more on being lean. While this would likely call into consideration a massive overhaul and study on which programs are successful in terms of graduates landing jobs – it would in the long run help to lower tuition costs and therefore increase competitiveness.

In the mean-time, with 47% of Americans essentially taking a negative view in the survey, the state of higher ed has now officially reached a critical one.